Last Friday evening, 21 June 2013, was not a good time to be out on Lough Derg. We were heading north, with the waves behind us, and had little difficulty until entering port, but we could hear on the VHF what must have been one of the biggest search and rescue operations on the Shannon in recent years.

We had switched on at what seemed like a fairly early point in the proceedings, and kept listening until the Coast Guard were assured that everybody was accounted for. We weren’t able to attend to the whole thing, as manoeuvres during and after berthing occupied our attention for some time, but we got a pretty clear picture. The Irish Times report (which will probably disappear behind a paywall at some stage) is here; I think it has some minor details wrong but the gist of it is correct; its later report is here. The Clare Herald has a very detailed account here, the Clare Champion account is here and the Limerick Post adds some information here.

The event was said by the Irish Times to be “hosted for FISA in Ireland by St Michael’s Rowing Club of Limerick” but I can’t see anything about it on either organisation’s website. I presume that the boats were something like this one.

It’s a quad, with each rower using two oars; it carries a cox and it’s used for touring rowing, so it’s not as slim as a standard racing shell.

By the way, just to be clear, none of the photos on this page were taken during last Friday’s operation.

From what we could hear, the operation involved volunteers from Killaloe Coast Guard, the RNLI at Dromineer, the Community Rescue Boats from Mountshannon and Limerick and at least one yacht, which (I think) took one of the rowing boats in tow; that yacht’s participation and careful provision of information to the Coast Guard was admirable. 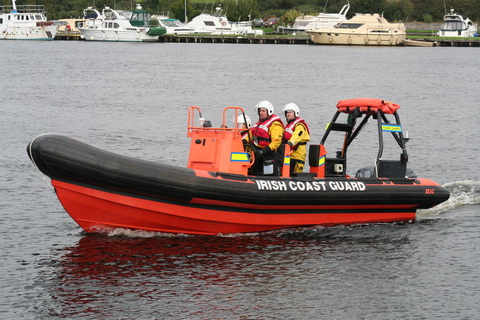 We heard discussion of proposals to ask the Civil Defence to participate as well, and the Clare Herald confirms they did turn out. It seems that the University of Limerick Activity Centre boat was out too, as was Peter Hooker of RNLI in his own boat.

That’s just the volunteers, and if I’ve left anybody out I’m sorry; let me know and I’ll amend this.

Then there were the professionals: the Coast Guard staff on VHF, the Gardaí on shore, the helicopter crew. And, again, the Clare Herald makes it clear that lots of other people were involved too: fire brigade and ambulance units, paramedics and a hospital consultant.

All in all, this was a major operation and a lot of people put in a lot of effort that night, in bloody awful weather.

I formed the impression that communication amongst the members of the rowing fleet, and between them and the rescue services, was poor. It was difficult to establish what rowers were where and how many were unaccounted for. The Clare Herald story seems to support that conclusion: it says that Gardaí had to travel to the rowers’ hotel to make sure that everybody had turned up and that the search was not formally stood down until 11.30pm.

I don’t know what communications equipment and what sort of organisation and safety procedures the rowing group had, so I’m not going to comment on them. Instead, I want to go off at a tangent. It struck me that life would have been easier for everybody if each boat had had a handheld VHF and someone able to operate it. Such sets can be bought for as little as £50 in the UK or €75 in Ireland.

So the technology is now very cheap and, for short range work as on Lough Derg, a handheld VHF should be adequate. But if you want to be legally entitled to use a VHF set, matters are much more complicated. I’ll discuss that in another post.

Thanks to Giles Byford for some photos of the RNLI Lough Ree lifeboat, now on this page.

I’ve moved my photos of rescue boats to a new page and added photos of some more services. Still a lot missing, though. 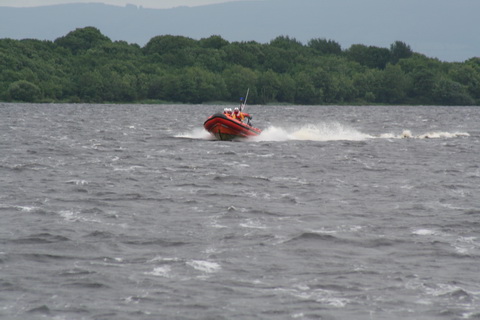 Lifeboat on the way 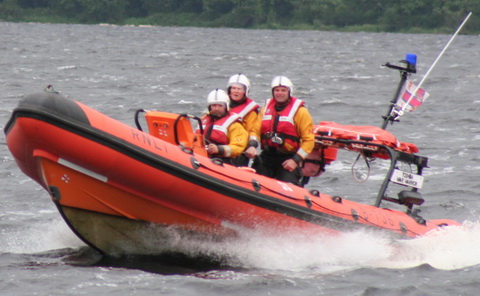 Coming alongside the casualty 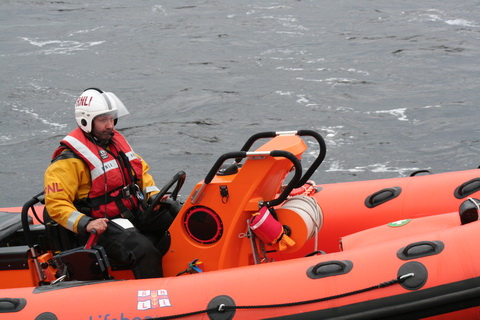 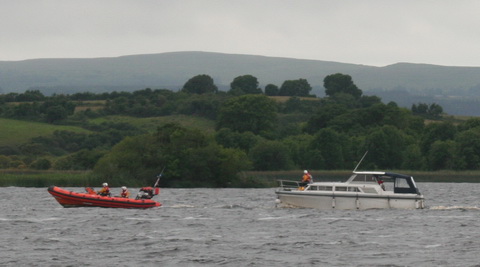