Gillogue, in Co Clare, is the site of a former Burlington factory and of a Clare entrance to the University of Limerick. It is also the site of a lock on the Plassey–Errina Canal, a section of the old Limerick Navigation, and of quarries, gravel pits and lime kilns.

And, according to the 6″ Ordnance Survey map, of around 1840, Gillogue also had a railroad. 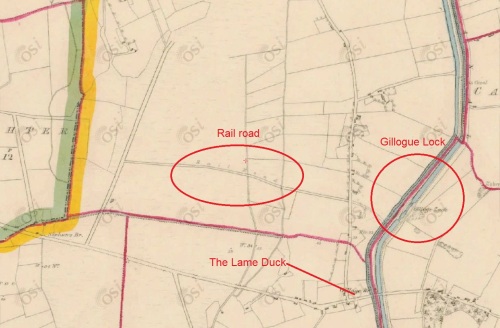 The railroad was almost certainly not for carrying passengers; it may have been a light railway, with small wagons pushed by men or pulled by horses, and designed to be taken up and moved elsewhere fairly easily. However, I have no hard information about who owned it, who built it or what it was for. I can make guesses, based on its closeness to the canal and to the quarries, but it would be nice to have evidence.

If, Gentle Reader, you know anything about it, do please leave a Comment below.

Last Saturday, I had just checked that the nineteen members of the Inland Waterways Protection Society, and accompanying walkers from O’Briensbridge Community Group, IWAI Lough Derg Branch and elsewhere, had successfully crossed the Shannon at Plassey, using the University of Limerick’s road-bridge instead of the Black Bridge, which is still closed after last year’s floods.

I was walking back to my car, so that I could drive to meet the group at Gillogue and ensure that they were getting their sandwiches at the Lame Duck, when I was accosted by a woman in a car. It was pouring rain and my dogs were getting impatient, but I listened politely while she asked if I would participate in a survey. “For whom?” I asked. “For Waterways Ireland,” she said. So I thought I’d better play along.

The survey was conducted as she sat in her car, dry, but obstructing the traffic, while I stood outside in the rain, keeping an anxious eye on the dogs. I was not inclined to prolong the time spent answering questions.

Now, I was told recently (after submitting an FOI request) that the towing-path and bridge at Plassey were leased by the Department of Finance to Limerick County Council, so it’s not entirely clear what Waterways Ireland has to do with the current management of that stretch or why it wanted user views. Did the interviewer choose that stretch as a bit of Limerick in which she could see water while staying in her car?

I was asked what I thought of the facilities “toilets and so forth”, and pointed out that there weren’t any. I struggled to convey the fact that, although I was walking before I was accosted, I disliked the activity intensely (especially in the rain) and that, although I visit Plassey several times a year, it is because I am interested in industrial archaeology, not because I want exercise. And there didn’t seem to be a way of conveying that I had organised for about twenty-five other people to walk the towing-path, but that I wasn’t myself participating.

Then I was asked if I had heard of Waterways Ireland and if I knew what they did ….

The 2004 survey is available from WI’s website here. But I wonder whether WI commissioned any surveys between 2004 and 2010 and, if so, where they are to be found.