To ask the Minister for Arts, Heritage and the Gaeltacht her plans to review the no swimming in locks and harbours under the by-law within the Canals Act by-laws of 1988 in view of the fact that there is no penalty for ignoring such signs; and if she will make a statement on the matter.

I have been informed by Waterways Ireland that while it has not determined a need for an associated penalty with this by-law at this time, the matter is being kept under review. I am advised also that the locks, docks and harbours are manned and/or frequently visited by Waterways Ireland Operations and Inspectorate Authorised Officers. Where swimmers are encountered, they are made aware of the by-law provision and the dangers of swimming in or near canal infrastructure and they are requested to remove themselves from the navigation. Such requests are normally acceded to. In the event of persistent offender(s) unwilling to obey direction from Waterways Ireland Authorised Officers, the assistance of An Garda Síochána is sought to remedy the situation.

Sometimes I wonder whether politicians have any grasp on reality. Swimmers in the Naller are a force of nature and are as far beyond the control of Waterways Ireland, the police and indeed politicians as hurricanes, the economy or Mick Wallace. People have been swimming in the canals, in Dublin and no doubt elsewhere, for generations, and nothing or nobody has been able to stop them.

I suspect that more people have swum in the canals than have ever boated on them; swimming is therefore a legitimate topic for waterways studies. Here is a preliminary contribution to the field.

Formerly used for landing turf from the west side of Lough Derg, Youghal Quay is now a swimming area. 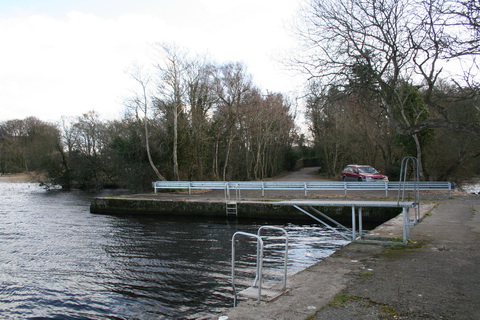 Ladder and diving board. Note the barrier at the landward end

The business end of the barrier

The other side supports a seat