How true these words are … 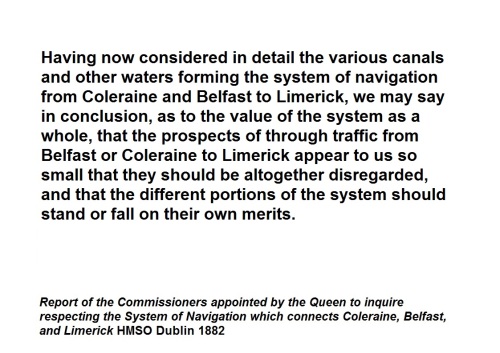 I do not know how a yacht can reach Kinnego or Sandy Bay Marina on Lough Neagh, from the coast, with its mast up.

It will be recalled that Her Majesty’s Loyal Home Rule Government in Belfast is considering investing in the Clones Sheugh [aka Ulster Canal] and that I asked DCAL, the department responsible, for a copy of the Business Case. To my surprise, it said:

Your request is being treated as a Access to Information request and will be handled under either Freedom of Information Act 2000 or the Environmental Information Regulations 2004.

Either way, DCAL has now told me that I can’t see it. The Business Case, which is apparently an addendum to the 2007 Business Case (which was rotten: see here passim), won’t be complete until November. I have made a note to remind myself to ask for it then.

I quite sympathise with the DCAL folks: it can’t be easy thinking of any good reason to spend taxpayers’ [British or Irish] money on the Clones Sheugh. But perhaps DCAL can spin it out until the Shinners have taken over the Free State, at which point the economics of Grattan’s Parliament will be in vogue and we can all take up growing flax, spinning and weaving, giving grants for canals and making money out of the slave plantations.

The possibility of the reopening of the Ulster canal would open up limitless opportunities in tourism. The idea that, once again, we could travel from Coleraine to Limerick, Dublin and Galway by boat would be absolutely wonderful.

Well, you can do that: by sea. There was never an inland navigation from Coleraine, Limerick or Dublin to Galway, despite the urgings of Lord Cloncurry and the nitwitted ideas of Sir Edward Watkin.

As for a connection between Limerick or Dublin and Coleraine, I suspect that Mr Ó hOisín is perpetuating the error into which Her late Majesty Victoria, by the Grace of God of the United Kingdom of Great Britain and Ireland Queen, etc, seems to have fallen when she appointed

Commissioners to inquire respecting the System of Navigation which connects Coleraine, Belfast, and Limerick

which Commissioners reported in 1882. There was no such system and, if Mr Ó hOisín can provide evidence that any vessel ever travelled by inland navigation between Coleraine and Limerick, I would be glad to hear of it. I prefer to think of the Commissioners’ conclusion that

As an investment for capital the whole canal system in Ireland has been a complete failure.

I see no reason why politicians of the twenty-first century should repeat the errors of their predecessors in the eighteenth, nineteenth and twentieth centuries.

You expect the Parnellite members to have a bit more sense, but one John Dallat said in the same debate:

[…] when the Ulster canal is open, tourists will come in their thousands and that will benefit the Lower Bann, the Foyle as well, and right over to Scotland.

Er, John? There are actually canals in other countries. Even in Scotland. Folk are familiar with canals. They’ve seen them before. And a short sheugh to Clones is not going to attract tourists (apart from the relatively small number of canal twitchers, who will need to tick it off on their lists) unless the town of Clones is particularly attractive. Which … well, let me put it this way: why not look it up on TripAdvisor?

Of course I’m all in favour of Clones myself: I am quite interested in concrete engine-sheds and former canal stores.

Anyone interested in seeing a Catalina flying-boat, like those based at Castle Archdale on Lough Erne during Hitler’s war, might like to troll on over to Portrush this weekend, 31 August and 1 September 2013, where Coleraine Borough Council is putting on the Northern Ireland International Airshow: a Catalina will be amongst the aircraft present.

I wrote recently about Jack Wall TD‘s Dáil questions about lockkeepers. WI now has a vacancy for a lockkeeper — in Coleraine.

I wonder whether fluency in Ulster Scots would be an advantage.