In the Irish Times of 5 January 2016 Fintan O’Toole has an article headed “Genuine local democracy part of the solution to flooding“. He points out that

As flooding gets worse, we will have to spend enormous amounts of money on engineering solutions. But in fact one part of the solution doesn’t cost any money at all. It’s called listening. Or, to give it its political title, it’s called genuine local democracy. Top-down, very expensive technocratic measures may have to be part of the response. But they will only work in a political culture that has eyes to look at the land and ears to listen to what people know about it.

Well, up to a point, Lord Copper. The article provides no evidence that a majority of the citizens — in any local authority area, Dáil constituency or other political unit — shares the erudite and enlightened views of those who write letters to, or columns in, the Irish Times. In fact, given that the citizens have, over more than one hundred years, continued to elect large numbers of nitwits to the local authorities and, for almost a century, to the Dáil, it seems unlikely that democracy — genuine, local or otherwise — will ever produce the right answers.

Which may explain why so much power now resides elsewhere, in the hands of experts and courtiers, and why elected representatives are reduced to throwing the occasional tantrum, providing tea and sympathy and making empty promises that then come back to haunt them.

I have not posted charts of Shannon traffic figures for some months now. That was not Waterways Ireland’s fault: it has kindly continued to send the figures to me, but other demands on my time have intervened. However, I have now charted the figures to the end of October 2015, which takes in the bulk of the year’s boating activity. All the usual caveats apply:

There has been a very slight increase in total traffic, although it might be better to regard the figures as confirming that traffic has stabilised at the new, lower level established around 2011.

All boats. The slight increase in total traffic seen up to May has continued to October

I commented on the May figures:

Again, that trend has continued. Hire-boat traffic is up …

… and private-boat traffic is down.

Perhaps the private boats were afraid to move from the new berths in Killaloe where they wanted to spend the winter at Waterways Ireland’s ridiculously low rates. Is this some delayed effect of the death of the Celtic tiger? Or was it the weather? Neither hire nor private figures changed hugely, but change they nonetheless did.

After a brief period when it seemed that private traffic was overtaking hired, the hire-boats are in the lead again

Of course hire-boat traffic fell much further from its 2003 figure: it dropped to 40% and is still not much higher, whereas private traffic is still more than 80% of its 2003 figure.

Change (private and hired) since 2003

It would be nice to have data on other forms of waterways usage.

I don’t know, but here’s a picture of 415 of them flowing through Castleconnell. [Update 13 December: that may be only 405 cumec.]

Actually, a cumec is one cubic metre of water per second, which is roughly one ton per second, which is a lot of water. And 415 cumec is the amount that, according to the blatts, the ESB is currently letting down the original course of the Shannon from Parteen Villa Weir; the minimum flow in that channel, as seen in summer, is 10 cumec.

Younger trees getting their feet wet

The stop planks seem to be quite effective … 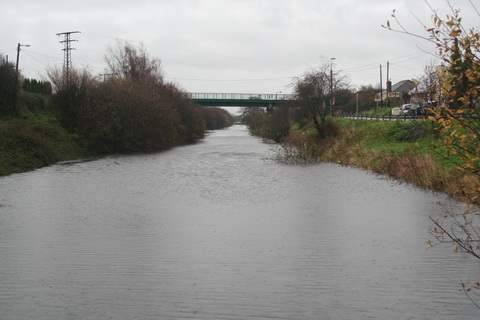