In December 2012 I published a post entitled Looking for Hilda in which I said that D B McNeill had written in his Irish Passenger Steamship Services Volume 2: South of Ireland (David & Charles, Newton Abbot 1971) that

In the autumn of 1964 the Ormonde Hotel at Nenagh took delivery of the Hilda from Holland. She is a modern canal cruising launch with central heating and a transparent roof. She is used for local trips on Lough Derg.

I said that she was described as a single-screw motor vessel with a diesel engine but that no further details are given. I sought more information about the Hilda, and hoped that a photo might be available.

The MV Ormond was purchased in Amsterdam in 1964 by Denis Gilmartin, owner of the Ormond Hotel in Nenagh, Co Tipperary. Denis was accompanied on that trip to Amsterdam by local solicitor Michael O’Meara. The vessel was used to entertain guests staying at the Ormond Hotel and in promoting tourism around Lough Derg in the 1960s. Home port for MV Ormond was Garrykennedy on Lough Derg. The MV Ormond was sold to Company in Cork that deployed it for cruises on the river Lee. I have photo of the MV Ormond docked at Garrykennedy Harbour circa 1968 which I will send you.

I am very grateful for that information and for the photo, which has now arrived.

Obviously the name Ormond was bestowed when the vessel reached Lough Derg, so it is possible that it was named Hilda when in Holland.

Can anyone identify the people and dog in the photo?

At Garry Kennedy lead mines, County Tipperary, on last Tuesday, Thomas Doyle, a miner, had his leg broken by a portion of the mine falling in. He was conveyed to Killaloe, on Wednesday, and remained all night in the boat in great pain. He was brought to Limerick on Thursday, and is now in Barrington’s Hospital under the care of Surgeon Gore.

The ramp to the pontoons in Dromineer is now sloping upwards

The water level at Banagher has risen about one metre in the past 35 days.

The ghost ship is back

Garrykennedy from a distance 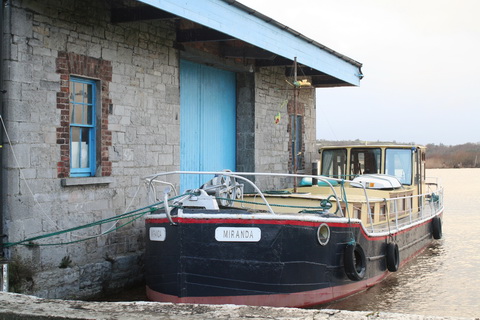 Fewer boats in WI berths this year, I think

On the morning of 2nd August 2012, Mr Patrick Danaher purchased fuel for his powerboat at New Line, Killaloe. That evening, the boat was seen floating partially submerged and overturned with the bow out of the water near Youghal Bay, Lough Derg. The boat had struck submerged rocks at high speed and suffered major damage to the outdrive allowing the free ingress of water into the boat. The boat was recovered that evening and Mr Danaher’s body was recovered from the lake the following day.