Here is some information about the work of Messrs Ockenden and Omer on Irish waterways up to 1759. It is extracted from a book by Henry Brooke; Ockenden had, twenty years earlier, subscribed to support Brooke’s play. It is not impossible that they were acquainted, in Ireland or in England. Apart from anything else, both were supporters of Frederick, Prince of Wales: see A N Newman “The Political Patronage of Frederick Lewis, Prince of Wales” in The Historical Journal Vol 1 No 1 1958 on Ockenden’s post in the prince’s household at £100 a year and here on Frederick’s “many attentions” to Brooke.

Brooke’s account contains some information about Ockenden’s work that I have not seen elsewhere. I found the reference to Brooke in Thomas McIlvenna This Wonder-Working Canal: a history of the Tyrone Navigation Coalisland Canal Branch IWAI 2005.

Who was William Ockenden?

William Ockenden has been described as a Dutch engineer who worked on three eighteenth century Irish navigations: the Mallow to Lombardstown canal, the Kilkenny/Nore navigation and the Limerick Navigation [Park Canal section], all of them notably unsuccessful.

It seems likely that he was English, not Dutch, but may have lived in Ireland before inheriting property in England. But was he an engineer or a mill-owner and MP? Were there one or two William Ockendens at the time?

Here is some information and some speculation. I would welcome more of the first.

A Steam-ship Canal from Kilkenny to Inistiogue

A gentleman has mooted the propriety of forming a steam-ship canal from Kilkenny to the tidal water of Innistiogue,  and he has lodged £400 in the Provincial Bank as a beginning, and as an earnest of his good faith. His name is not given, why we cannot say; but of the fact that the money is actually lodged, we have been assured by the respectable manager of the bank, Andrew M’Kean Esq.

This half anonymous character is to be regretted; and we trust the promoter will not hesitate to announce his name at once, and set the project fairly before the public. Men do business now-a-days with their eyes well open. It is computed that £320000 would be sufficient for the completion of the undertaking. The distance is only thirteen miles. The promoter calls upon eight hundred men in the counties of Kilkenny, Waterford, and Wexford to come forward with £400 each, or else raise the money in £5 shares.

[NB I have not been able to find any later notice of the development of this proposal. Further information will be welcomed]

Phase 2 of the survey (from Kilkenny City to Inistioge) commenced in 2011 and will be completed in 2012.

It also says (on the same page)

Phase 2 of the survey (from Kilkenny City to just north of New Ross) is in the final stages of editing and will be completed in early 2014.

If anyone has seen any sign of it, I would be grateful for a link. 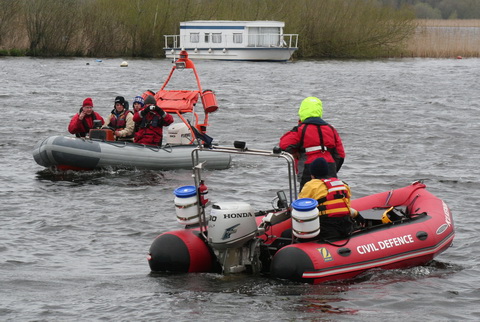 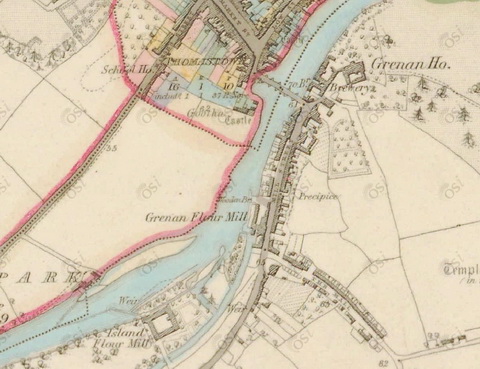 Thomastown, Co Kilkenny, is offering a month-long programme of events from 1 June to 1 July 2012, including:

There will be exhibitions and other events during the month; download the brochure here [PDF]; read about the Thomastown Weir and the Thomastown Community River Trust here.

We recall that Samuel Lewis wrote of Thomastown in 1837:

A very considerable trade was formerly carried on, and the town was the commercial depot for the county of Kilkenny ; flat-bottomed boats of an aggregate burden of 11,000 tons were constantly employed in conveying goods from this town, besides many others which did not belong to it; but the river is now choked up with deposits of sand. Inistioge has become the head of the navigation of the Nore, and the boats employed on the river at this place do not exceed an aggregate burden of 150 tons; the goods are now conveyed on Scotch cars by land from Waterford to Kilkenny. The improvement of the navigation of the Nore would tend greatly to the revival and extension of the trade of the town, and to the development of the resources of the county, which is rich in marble, coal, culm, slate, and limestone, for which, in addition to its agricultural produce, it would afford facilities of conveyance to the neighbouring ports. It has been estimated that the clearing of the channel of the river, which would open the navigation from New Ross to this town for flat-bottomed steam-boats of 70 tons’ burden, might be accomplished at an expense of £15,000, and effect, by a reduction of the charges for freight and the discontinuance of land carriage, a saving of at least £10,000 per annum. There are several large flour-mills worked by water in the town and its vicinity, and also two breweries and a tan-yard.

On the occasion of Her Majesty’s Diamond Jubilee …

… (that is, of course, Her Late Victorian Majesty), F E Prothero suspended his explorations of Irish waterways after he had descended the Nore, from Abbeyleix to New Ross, in May 1897. Here is his account of that trip.

Members of the Heritage Boat Association have, in recent weeks, visited Piltown (Co Kilkenny) and Portlaw (Co Waterford) by barge, the first time in many years that large vessels have been up those rivers.

Many of the published accounts of Portlaw, including the Heritage Council’s Heritage Conservation Plan, pay inadequate attention to the navigation of the Clodiagh; it may have been even richer than we thought.

The HBA has a press release about some significant finds at Portlaw.

The owners of the barge Hawthorn joined other boats for the trips and wrote about them here:

Here is the relevant section of the OSI map for Portlaw (choose one of the Historic options). Here is where the Pil joins the Suir (zoomed out).

Here is my own article (in need of updating) about Portlaw and the Clodiagh.

Incidentally, I contend that the OSI maps are wrong in describing the gates on the canal as flood gates: they would open to, rather than close against, an incoming flood, and would prevent the discharge of an outgoing flood.