I am grateful to Waterways Ireland for sending me the Shannon traffic figures for the last three months of 2014. They sent them last month but I didn’t have time to deal with them until now.

Regular readers may wish to skip this section

All the usual caveats apply:

As we saw in September, traffic is down on 2013, but there has been little change over the last three years.

The vertical scale on this chart is different from that for hired boats so the changes in private boating from one year to another are exaggerated (by comparison). The good weather did not prevent a fall in activity.

Again, the lowest figure in my records, but the drop was small; perhaps the hire trade is bouncing along the bottom (as it were). I wonder whether anyone has a Grand Plan for recovery or rejuvenation.

In the five months January, February, March, November and December, there were 385 passages altogether, less than 1% of total boat movements for the year. If money can be saved by ceasing to operate the locks and bridge during the winter, they should be closed except, perhaps, for one Saturday per month, to be arranged for a non-flood day.

Here is the order of popularity.

Lough Allen is a delightful place but it is not popular.

Some weeks ago Waterways Ireland kindly supplied me with the Shannon traffic figures for the final three months of 2013 and I have just now had a chance to add them to my spreadsheets and produce some graphs.

The usual caveats apply: the underlying figures do not record total waterways usage (even for the Shannon) as, for instance, sailing, fishing or waterskiing on lakes or river stretches, which did not involve a passage through a lock or Portumna Bridge, would not be recorded. The passage records are our only consistent long-term indicator of usage of the Shannon but they would not show, for instance, a change in the balance of types of activities from those in larger cruising boats to those in smaller (sailing, fishing, waterskiing) boats. On the other hand, they do include the Shannon’s most significant tourism activity, the cruiser hire business.

It is good to note, incidentally, that, in its draft Corporate Plan 2014–2016, Waterways Ireland says that it intends to

Develop and implement a research programme to measure waterway usage and inform planning and development.

It won’t be easy to do, but we need much better measures of all types of activities on all seven of the waterways managed by WI.

The final outcome for 2013 won’t greatly surprise anyone who has read earlier bulletins on this subject, like this covering the figures to end-September 2013. All the illustrations are based on information supplied by Waterways Ireland, with some minor adjustments by me to eliminate anomalies, but the interpretation and comments are mine own. 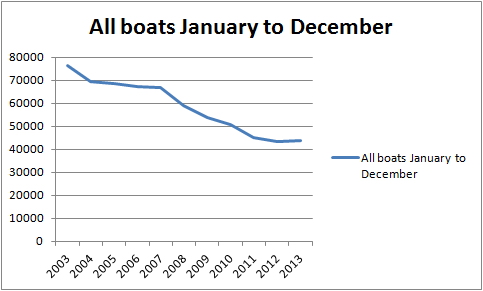 The decline in traffic since 2003 seems to have been halted …

Total Shannon traffic as a percentage of 2003 traffic 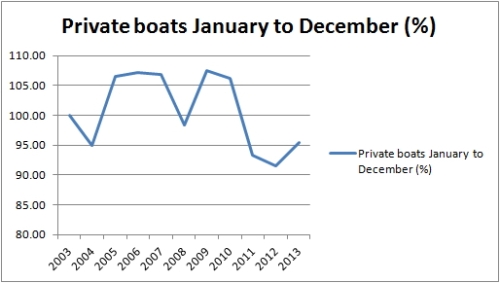 Traffic in private boats seems to be recovering, but what is perhaps more significant is that it never went more than 10% above or below the 2003 figure. It has been remarkably stable over the period, despite the economic crash and despite the anecdotal evidence of boats being sold to overseas owners and trucked out of the country. Perhaps larger boats were replaced by smaller? Perhaps only boats bought in the boom were sold in the bust? Unfortunately the deficiencies of the registration system make it very difficult to determine what has been happening. 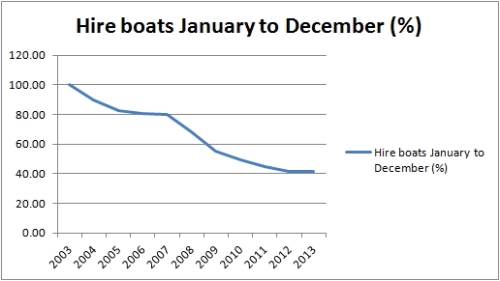 But if private-boat traffic has been remarkably stable since 2003, the same cannot be said of hire-boat traffic. The best that can be said of 2013 is that the figures didn’t get [much] worse, but a 60% decline since 2003 is really, really dreadful.

WI’s draft Corporate Plan, which does not explicitly mention the hire industry, talks of

I don’t know whether that omission means that WI sees little prospect of a rejuvenated hire-boat industry. And I note that, other than in the titles of organisations, the draft plan rarely mentions tourism or tourists. Are the waterways only for natives? If so, is that a deliberate policy decision? Or is there something that could be done, cheaply, to help to revive waterways tourism?

Emma Kennedy, writing in the Sunday Business Post on 23 February 2014, wrote about Fáilte Ireland’s latest brainwave, which is to “target” three groups:

No families with kids, I see, although “Families & Loved Ones” (the latter term, by the way, nowadays seems to mean either dead people or their relicts) were one of the two “primary target customer segments” identified in Fáilte Ireland’s Inland Cruising Market Development Strategy. (Fat lot of good that strategy did, but we mustn’t be bitter.)

Anyway, without having done any market studies (though WI has funded lots of them), it seems to me that there is scope for more tourism on the waterways, but it might not be on traditional cruisers. It might involve outdoor activities like cycling and walking along the canals and Barrow: WI’s plan discusses them, but without adverting to an overseas market. And it might involve small-boat activities — canoeing, touring rowing, small-boat sailing, camping — on Shannon, Erne and SEW: WI says it will support micro-enterprises, and those providing outdoor activity holidays may need expertise and assistance rather than hard cash.

I admit to having little evidence on this, but it seems to me to be too early to give up on the tourism potential of the waterways. And the decline of the cruiser hire business does not necessarily mean that all waterway tourism is doomed. 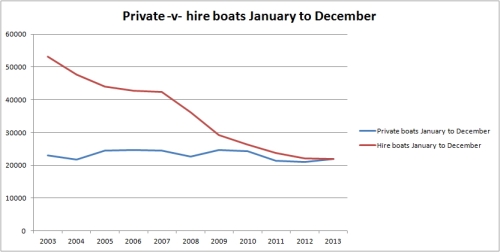 That said, 2013 was the year when, for the first time since Noah was an Able Seaman, the number of passages by private boats exceeded that by hire boats. 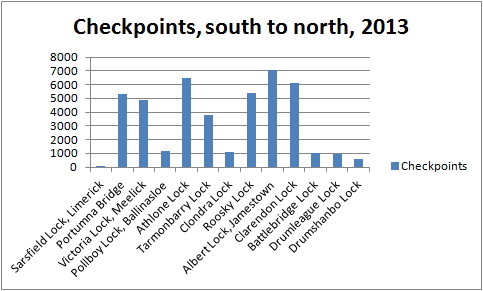 The points at which numbers were recorded

Finally, this chart suggests that any structures that were not built by the Shannon Commissioners in the 1840s will not attract many visitors. The extensions off the main stem of the Shannon — south to Limerick, west to Ballinasloe, east through Clondra, north to Lough Allen — are much less used than the main line from Lough Derg to Lough Key. It seems unlikely that any further extensions, especially to small towns that it would take three hours (at canal speed) to get to, are likely to be any more successful in attracting traffic.

WI says today, of its sale of surplus barges:

The ” Fox” workboat/barge currently located at Roosky has been withdrawn from the Sale .

The figures for Shannon lock passages to the end of June 2013 are now available. The decline continues, though perhaps more slowly.

The usual caveats apply: the underlying figures (kindly supplied by Waterways Ireland) do not record total waterways usage because, for instance, sailing, fishing or waterskiing on lakes or river stretches, which did not involve a passage through a lock or Portumna Bridge, would not be recorded. The passage records are our only consistent long-term indicator of usage of the Shannon but they would not show, for instance, a change in the balance of types of activities from those in larger cruising boats to those in smaller (sailing, fishing, waterskiing) boats. It is quite possible, therefore, that overall usage might be increasing while long-distance cruising was declining.

As it happens, the figures show a small increase over 2012 in passages by private boats. I suspect that July’s warm weather will spur a further increase.

Folk living in Ireland, whether owners or prospective hirers, are likely to be able to react quickly to better (or worse) weather by doing more (or less) boating; folk living abroad may be less able to change their holiday plans. Accordingly, July’s weather might (I’m speculating here) mean an increase in passages by private boats and by boats hired by Irish residents; it might not lead to an increase in hiring from abroad.

Traffic in hired boats continued to decline in June. 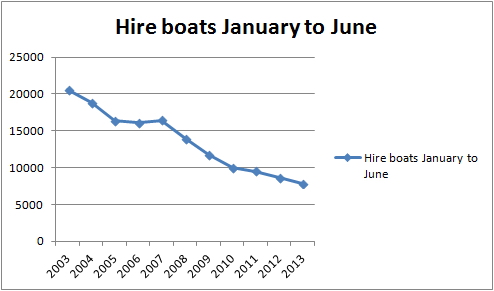 That decline outweighed the small increase in private traffic, leading to an overall decline in the first six months as compared with the same period in 2012, which itself continued the pattern set in 2007.

Shannon lock and bridge passages by all boats January to June

I wondered whether the figures might show any change in the geographical distribution of activity. WI’s reports don’t show separate figures for private and hired boats for the individual locks, but it seems to me that the hire business is becoming more concentrated on northern waters, from Lough Ree upwards. If that is so, then there might be an increase in the proportion of passages through the northern locks, from Tarmonbarry upwards, and a decrease in the proportion passing through Portumna Bridge and Meelick (Victoria) Lock.

I put the WI reporting stations in four groups:

The figures suggest that the distribution is indeed changing, but gradually rather than dramatically. Athlone’s figures are pretty steady, the outliers are declining slightly and Portumna + Meelick are declining a bit more; the northern locks (Tarmonbarry to Knockvicar) are taking the gains. Comments or alternative interpretations welcome. 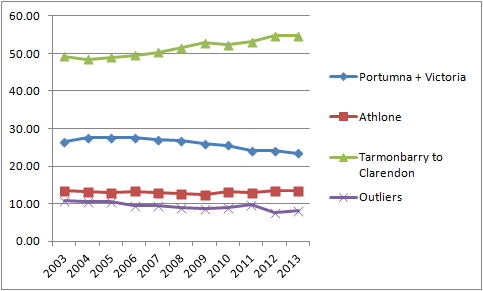 The figures for 2013 are for the six months January to June; those for other years are for twelve months.

The locks could of course be grouped in other ways, and I may try some of them in future months.

Lock sizes on the Shannon Navigation

If I’ve left anybody out, please let me know and I’ll correct my error.

Note that the requirement for a licence includes anyone delivering green diesel, or keeping it for delivery, so that purporting not to charge for the diesel makes no difference.

So there are now two licence-holders on the Shannon. Still no sign of IBRA members (save that Quigleys supplies Waveline) but no doubt they will appear soon.

E&OE: the list now covers 170 pages and I may have missed someone. If so, sorry; let me know and I’ll post the information.

As far as I can see, from the new list published by Revenue today. there is still only one trader along the Shannon who is licensed to sell marked fuel (green diesel).

I wrote here about the Revenue Commissioners’ new Marked Fuel Trader’s Licence. In brief, anyone selling marked fuel oil [green diesel] has to pay €250 to get a Marked Fuel Trader’s Licence and must also make monthly returns to Revenue of all “oil movements”. I thought, but I wasn’t sure, that this applied to marinas and others selling fuel for private pleasure navigation; as far as I could see at the time, none of those selling fuel along the Irish inland waterways had registered.

I have two pieces of news about that.

First, the Revenue Commissioners have confirmed that the new scheme does apply to sales of marked fuel for private pleasure navigation: in other words, those selling green diesel for boats along the inland waterways should all be registered under the scheme.

Second, I am happy to say that there is now at least one registered seller: Ciaran Fallon of Rooskey Craft & Tackle at Rooskey Quay. (There may be others that I haven’t spotted; you can check the latest list of Licensed Marked Fuel Traders here.) For the moment, then, Rooskey Craft & Tackle seems to have a monopoly of the legal supply of marked fuel on the Irish inland waterways.

The drowning of the Celtic Tiger

Valerie Anex’s photos of ghost estates, many on the Upper Shannon and the Shannon–Erne Waterway, are worth a look. Flash is required. Some more of them here, where you can see them in high resolution.