Piracy on the Shannon

The Henrietta sloop, of Ballylongford, was boarded last Friday morning, in the mouth of the Adare river, on her passage home from Limerick, by six men, armed and with their faces painted, who ordered all the passengers up on deck, and rifled the persons of every one of them, carrying off a good booty. While engaged in this daring outrage, the ruffians presented fire arms at the heads of their victims, threatening instant death in the event of resistance. They also went below and seaarched the cargo, consisting of groceries, woollens and mercery, and plundered a bale of silk handkerchiefs, muslins, laces, and shawls.

On the same night a sail-boat belonging to Knock, county Clare, was also plundered by a party of ruffians, who boarded her in the Shannon.

Horace Kitchener and the peat briquette

Another turf connection has just come to my notice. Donal Clarke, in Brown Gold: a history of Bord na Móna and the Irish peat industry (Gill and Macmillan, Dublin 2010, but it is no longer on their website), says that in the 1850s Horace’s father experimented at Ballycarbery [which seems to be a long way from Ballylongford] “with the production of peat charcoal for se in the manufacture of gunpowder” and, in the process, discovered a way of making peat briquettes.

Not a lot of people (apart from Donal Clarke’s readers) know that.

Incidentally, Kitchener appears in this trip around the world with Irish waterways.

Herbert Kitchener, born in Ballylongford near Saleen in 1850, shortly after the Shannon Commissioners completed their work, is to appear on a new UK £2 coin.

SHANNON-RIVER. This is by far the most considerable river in Ireland, or perhaps in any known island, not only on account of its rolling 200 miles, but also of its great depth in most places, and the gentleness of its current, by which it might be made exceedingly serviceable to the improvement of the country, the communication of its inhabitants, and consequently the promoting inland trade, through the greater part of its long course, being navigable to a considerable distance, with a few interruptions only of rocks and shallows, to avoid which there are in general small canals cut, to preserve and continue the navigation.

Thus Wm Wenman Seward, Esq [correspondent of Thomas Jefferson], in his Topographica Hibernica; or the topography of Ireland, antient and modern. Giving a complete view of the civil and ecclesiastical state of that kingdom, with its antiquities, natural curiosities, trade, manufactures, extent and population. Its counties, baronies, cities, boroughs, parliamentary representation and patronage; antient districts and their original proprietors. Post, market, and fair towns; bishopricks, ecclesiastical benefices, abbies, monasteries, castles, ruins, private-seats, and remarkable buildings. Mountains, rivers, lakes, mineral-springs, bays and harbours, with the latitude and longitude of the principal places, and their distances from the metropolis, and from each other. Historical anecdotes, and remarkable events. The whole alphabetically arranged and carefully collected. With an appendix, containing some additional places and remarks, and several useful tables printed by Alex Stewart, Dublin, 1795. [Google it if you want a copy.]

Seward was one of many people who saw the Shannon as a valuable resource, even if they were vague on how it was to yield a return. I was reminded of that on reading the Strategic Integrated Framework Plan for the Shannon Estuary 2013–2020: an inter-jurisdictional land and marine based framework to guide the future development and management of the Shannon Estuary. The Introduction includes this:

The Shannon Estuary is an immensely important asset and one of the most valuable natural resources in Ireland and the Mid-West Region in particular — the fringe lands and the marine area both provide space and location for development, activities and opportunities to progress economic, social and environmental growth within the Region.

This report is an attempt to show how the estuary could deliver a return. The core point seems to be that a small number of areas are designated as “Strategic Development Locations for marine related industry and large scale industrial development”, thus protecting them from the attentions of the environmentalists: the whole of the estuary is a Special Area of Conservation and a Special Protection Area.

Almost all the Strategic Development Locations are already industrialied in some way:

There is one more, Inishmurry/Cahircon (which is not boring), which is even more interesting because there is no industry there at present. It was used as a resting place for certain vessels, but it was also proposed as the site for an explosives factory. Perhaps the designation as a Strategic Development Location suggests that that proposal is not dead but merely sleeping.

Ballylongford is equally lacking in industry, despite activity at Saleen in the early nineteenth century. However, Shannon Development assembled a large landbank nearby; the report’s Executive Summary says:

The Ballylongford Landbank benefits from a significant deepwater asset and extant permission for a major LNG bank.

Here is the area in question. Note that the red oval is just to indicate the rough location; it does not show the boundaries of the landbank. 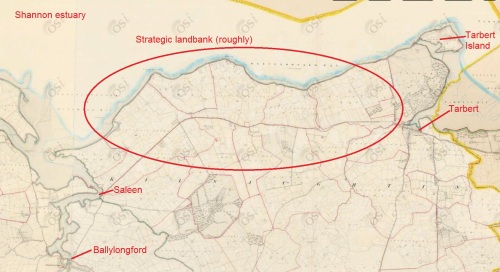 Shannon Development agreed to give a purchase option on a little uder half of the site to Shannon LNG Ltd, which proposed to build a liquefied natural gas terminal there, to be supplied by ship; much information is available here.

The Commission for Energy Regulation decided to introduce charges that would have increased Shannon LNG’s costs; the company took the matter to court but, yesterday, lost its case. The Irish Times report here will probably disappear behind a paywall at some stage; the Irish Independent report is here and the Limerick Leader‘s here (its photo shows Tarbert and Moneypoint; the Ballylongford site is off to the left).

If the Ballylongford development does not proceed, plans for economic growth on the Shannon estuary may prove to be for the birds.

The Irish Examiner reports on the proposed LNG storage terminal here. Richard Tol provides an informed view here. The objectors’ site is here. I note from the Examiner report that they say:

Shannon LNG is hoping to make millions of euro profits every year with state support at the consumers’ expense at time of increasing fuel poverty.

Unfortunately the report did not say why a wish to make profits is to be deprecated or why it is a bad idea to increase fuel supplies and security “at time of increasing fuel poverty” but perhaps the extensive bogs, whose product was exported through Saleen, are still available.

OPW on the Shannon Estuary

A brief note on the navigational interests of the Office of Public Works on the Shannon Estuary.

Page 84 of Ruth Delany’s The Shannon Navigation (Lilliput Press 2008) has a drawing with this caption:

A drawing by Edward Jones which it is thought might depict the Shannon Commission’s survey in progress at an unidentified location possibly down the Shannon Estuary. (Courtesy of the Society of Antiquaries of London)

I suggest that the drawing is of Saleen, on the Ballylongford Creek in Co Kerry, on the lower reaches of the Shannon Estuary. The first word written on the  drawing looks like “Sawline”, which might be a version of “Saleen”.

The Irish Times tells us that Endesa, a Spanish company, intends to sell its Irish operations. They include two water-side sites, at Great Island in Co Wexford and Tarbert in Co Kerry, as well as a near miss in Rhode, Co Offaly, and a fourth in Co Mayo. 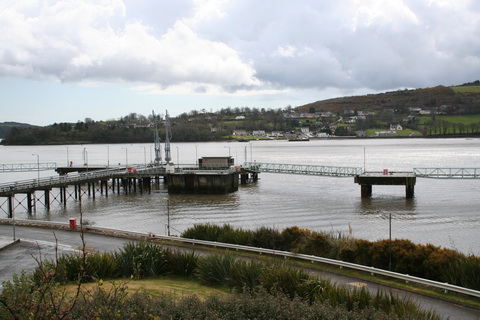 The Great Island power station on the Suir opposite Cheekpoint

The Irish Times says that Endesa had intended to change Great Island and Tarbert from diesel to natural gas. The Tarbert project received planning permission in December 2010; the Irish Times report was probably inaccurate in suggesting that a submarine cable from Tarbert would supply the ESB generating station at Moneypoint which, being a generating station, would be able to generate its own. 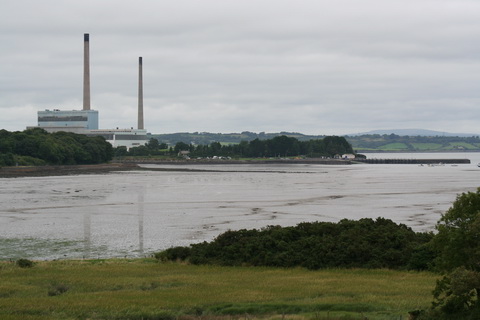 However, I had heard that Tarbert might have received its natural gas from the proposed storage plant at Ballylongford, near Saleen Pier whence Trinity College turf was sent to Limerick. A pipe from Tarbert might have supplied Moneypoint. I don’t think construction has yet begun.

The old Tarbert power station was built on the site of the Tarbert battery, the largest of the six Shannon estuary batteries and the only one to mount seven guns.

The Irish Times reports that:

AN BORD Pleanála has approved the application by Endesa Ireland, part of the Spanish energy company, to build a combined-cycle gas turbine power plant on the former ESB station at Tarbert, Co Kerry.

I presume that, when it says that “A submarine cable is to supply Moneypoint.” it means that a submarine pipe will do so: I imagine that the power station at Moneypoint is more likely to want gas than electricity from its rival across the estuary.

Tarbert is now the southern station for the ferries that cross the Shannon Estuary, but it has had a long history as an estuary port. Even before the first of the piers was built, Tarbert Roads provided a sheltered anchorage, and the estuary steamers adopted ingenious methods to get passengers and cargo from shore to steamer and vice versa.

Tarbert was also an important administrative centre and Tarbert Island (as was), which now houses piers and power station, had a Coast Guard station, a lighthouse, a signal mast and the largest of the six forts that guarded the Shannon Estuary. The ESB power station is built on the Ordnance Ground, right on top of the seven-gun battery, as you can see if you play with the Overlay feature on the Historic 6″ Ordnance Survey map.

Moneypoint had a large quarry; it may have been from there that Charles Wye Williams got the “marble” that he polished in the marble mill at Killaloe.

From the hearts of cranes

Several ports on the Shannon Navigation have old cranes (or parts thereof), most of them nicely painted. Their age may not be apparent, but it is possible that they date back to the days of the Shannon Commissioners in the 1840s; at least one of them may be even older than that.

This page shows photographs of those cranes I know of, and discusses their possible ages. But there is much that remains unknown, and readers may be able to cast light on some of the mysteries.