Who writes this stuff?

The National Inventory of Architectural Heritage on the Black Bridge at Plass[e]y and on Baal’s Bridge in Limerick.

It would be nice if the NIAH provided reliable historical information.

According to the Railway & Canal Historical Society’s Events page, its annual Clinker Memorial Lecture, to be held in Birmingham in October 2014, will be about River Shannon steamers in the second quarter of the nineteenth century:

The 2014 Clinker Memorial Lecture will be held in Birmingham on the afternoon of Saturday 18th October 2014. The speaker will be Brian Goggin, BA (Mod), MA.

Brian graduated from Trinity College, Dublin in Economics and Politics, and spent some years as honorary Editor of the quarterly magazine of the Inland Waterways Association of Ireland. He and his wife Anne have been boating on Irish inland waterways since the late 1970s. He is currently working on a book on the Shannon steamers of the 1830s and 1840s, and the Clinker Lecture will draw on his research.

Before lunch (and independent of the Lecture) there will be a walking tour of central Birmingham, focusing on sites of waterway and railway interest.

I’ve just been writing elsewhere to the effect that national politicians are a pack of nitwits. I was cheered therefore, in a sense, to note that local politicians, at least in Co Mayo, are (if possible) even more thick-headed than their national counterparts.

However, I am happy to be able to offer a solution, one that kills two birds with one stone. There are, it seems, many English pensioners living in poverty on boats on the canals and unable (or at least unwilling) to pay for the privilege. I had intended to suggest that Waterways Ireland should provide them with moorings away from the honeypot areas.

WI could then charge more for berths at, say, Hazelhatch, Sallins, Blanchardstown and Lowtown, catering for those in work who could afford a couple of thousand a year, while the pensioners, who don’t need to be within commuting distance of Dublin, could be accommodated in rural areas where their small additional spending would make a difference. That would help to increase those community and economic benefits to which the subsidy-seeking boat-owners draw our attention, bringing spending to deprived rural areas.

I was thinking of Pollagh, for instance: it has a pub, a shop, a church and a visiting burger van, and easy access to supplies of turf.

But the Mayo problem reminds me that Mayo too has lakes. So why not ship the boats to Mayo? As the canals byelaws provide that boats should not discharge any water other than from engine-cooling, these boats must be fitted with holding tanks or other non-discharging loos, so there would be no pollution problem. In fact Mayo could advertise itself to the world as offering floating retirement communities at modest cost, thus renewing its own population while solving a problem for boat-owners. I thnk this is a winner.

Here is a short page about a canal system I had not heard of before today. It was a network of turf canals, with a sea lock, on the estate of Scotts of Willsborough, near Eglinton, on Lough Foyle; the Scotts supplied [London]Derry with turf and, like James Macnab at Portcrusha, reclaimed the land from the bog.

Another unbuilt canal mentioned by the indefatigable Mr Atkinson.

A proposal for making a canal from the city of Armagh to the river Blackwater, near the town of Moy

In order to shew, that carrying into effect the annexed sketch of a line [alas not annexed to the Google scan of Atkinson’s book], for opening a navigable communication from Armagh to the river Blackwater, would be a work of public utility, the following reasons are most respectfully submitted to the Right Honourable and Honourable the Committee of the House of Commons.

From Armagh, being the most considerable market in the kingdom for the sale of brown linens, the manufacture of that staple article is carried on to a very great extent in its neighbourhood; but this manufacture is in danger of being most materially injured, from the great scarcity of fuel, which is such as to oblige the opulent inhabitants to use English coal, at a great expense of land carriage; and they have latterly, at inclement seasons, been under the necessity of subscribing large sums, to procure that article at a low price for the poor, to prevent them from perishing.

Should a navigation be opened from Lough Neagh it would give the means of a supply of turf from the extensive bogs in the neighbourhood of the lake, would open a communication with the collieries at Coal island, in the county of Tyrone, and bring English or Scotch coal at considerably under the prices at which they can now be procured.

An extensive trade in general articles of merchandise being carried on from Armagh, not only to its own neighbourhood, but to a considerable part of the counties of Monaghan and Tyrone, by opening a navigation through Lough Neagh to the ports of Belfast and Newry, this trade would be very considerably extended, to the great advantage of Armagh, and all those places to which its trade extends, and would tend much to improve the public revenue.

To the great number of bleach-greens and flour mills in the neighbourhood of Armagh, water carriage would be of the highest importance, as well for the conveyance of bleaching stuffs, coals, grain, and flour, as of timber, slates, and other heavy articles, used in erecting and repairing the necessary buildings, machinery, &c.

In a large tract of country, from Blackwater town to Lough Neagh, and from thence up the river Bann, and along the canal to Newry (an extent of nearly 30 miles), there is no limestone whatever; so that lime can only be procured by land carriage from a distance of several miles, which prevents its being at all used in that important national object — agriculture.

Was a canal opened from Armagh, it must necessarily go through the lands in that vicinity, containing inexhaustible quantities of limestone, which could be conveyed by boats returning from Armagh, at a very inconsiderable expense, to all that part of the county above mentioned.

The cut, as laid down in the plan, would extend about five and a half miles; and according to the estimate, would, when completed, cost from £18,000 to £20,000, about one-third of which could be raised by subscription.

To keep the works in repair, and pay interest to the subscribers, would require a toll of about sixpence per ton on all boats carrying coals, or any other species of merchandise; but boats laden merely with turf or limestone might be charged only twopence per ton.

The number of horses constantly employed in bringing coals, turf, and other necessaries, to Armagh, amount to some hundreds; two-thirds of these would, from a canal, become unnecessary, and consequently make a saving to the country of their keeping, attendance, &c to a very large amount.

Should the Armagh navigation be carried into execution, it would be necessary to give the commissioners of it a power of laying on a very small toll on vessels coming into the Blackwater from Lough Neagh, to enable them to clear, and keep in order, a cut which was made many years ago (as marked in the plan), to avoid a sand bank in the mouth of the river Blackwater. 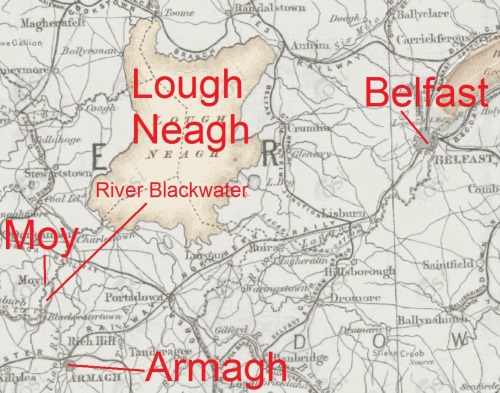 A Atkinson Esq (late of Dublin) Ireland exhibited to England, in a political and moral survey of her population, and in a statistical and scenographic tour of certain districts; comprehending specimens of her colonisation, natural history and antiquities, arts, sciences, and commerce, customs, character, and manners, seats, scenes and sea views. Violent inequalities in her political and social system, the true source of her disorders. Plan for softening down those inequalities, and for uniting all classes of the people in one civil association for the improvement of their country. With a letter to the members of His Majesty’s Government on the state of Ireland Vol II Baldwin, Cradock, and Joy, London 1823.

A canal has been in contemplation, to be cut from this town to Armagh, and an iron road is also talked of, but there has been no decision in either cases.

G boats were wooden horse-drawn boats, built to carry turf (peat) during The Emergency, which to the rest of the world was the second world war. Some of them [PDF] were built by Thompsons of Carlow, whose archives are now in the National Archives of Ireland; you can read about them in the Summer 2012 newsletter [PDF] of the Archives & Records Assocation.

The same organisation’s Autumn 2013 newsletter had an interesting article about Lagan Navigation archives in the Public Record Office of Northern Ireland. Unfortunately something has gone wrong with the links on its newsletter web page so the relevant PDF is not available at the moment.

It seems that this chap has bought the glof course near the (proposed) Doonbeg Ship Canal. I’m sure that any further development will be in the best possible taste.

A train ferry, claimed to be in service on the Liffey

Fishing at Ringsend the hard way

Launching the Irish Elm in Cork

Parteen Villa Weir is sending large amounts of water down the original channel of the Shannon, and over the Falls of Doonass, to draw water off from the upper reaches of the river. 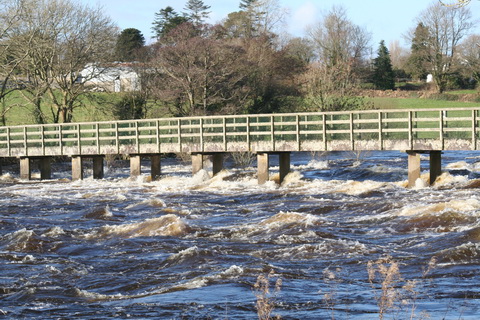 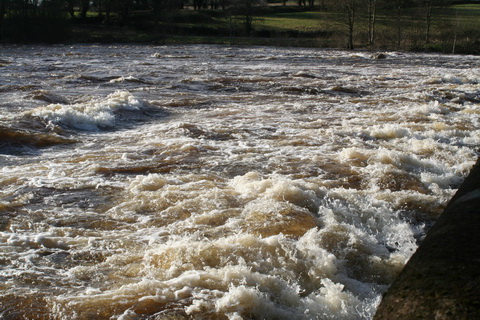 The downstream side of the bridge 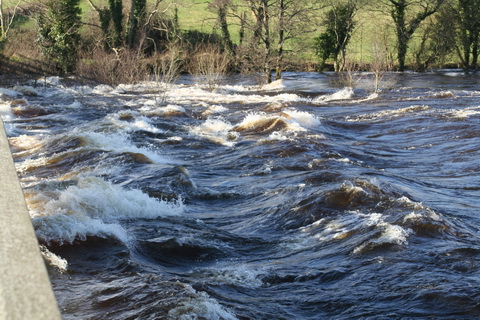 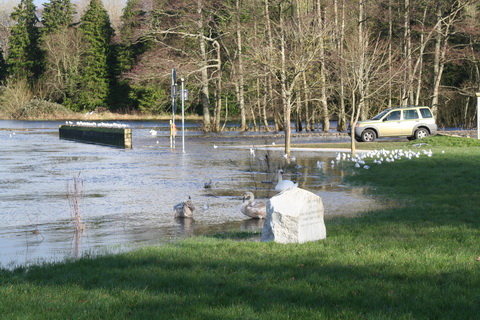 Levels below Parteen Villa have not yet reached those of 2009 and the channel can probably take more before folk get flooded.

The Old River Shannon site has some photos taken at Parteen Villa Weir.

Herbert Kitchener, born in Ballylongford near Saleen in 1850, shortly after the Shannon Commissioners completed their work, is to appear on a new UK £2 coin.